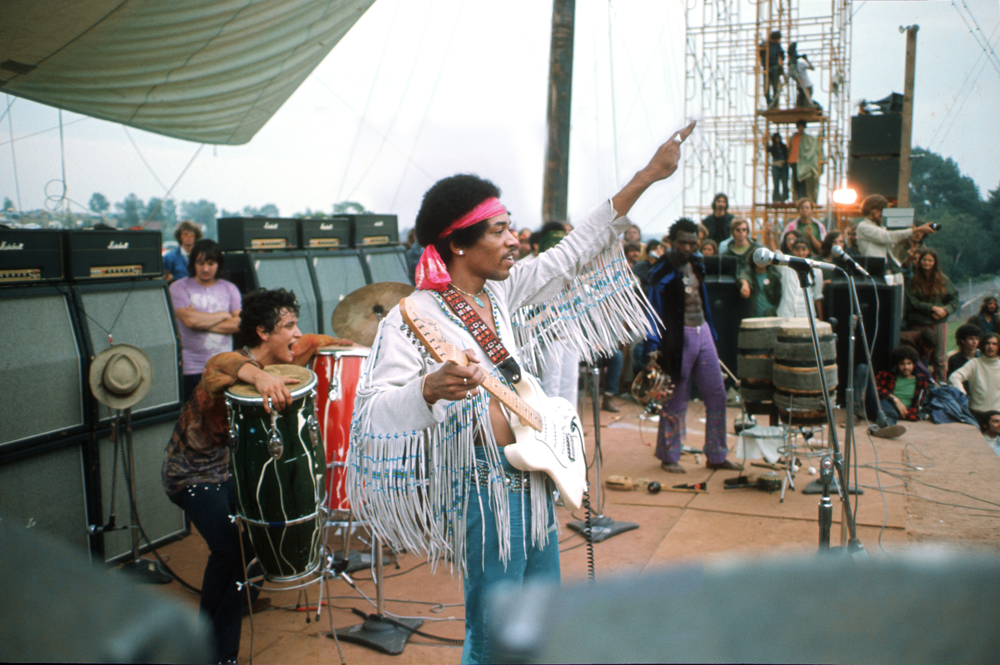 Fender Musical Instruments Corporation (FMIC) today announced the launch of its newest artist model addition: the Limited Edition Jimi Hendrix TM Stratocaster; it honours rock legend Jimi Hendrix on the eve of the 50 th anniversary of Woodstock, where he delivered one of the most-iconic performances in rock music that amplified the voice of a generation. With only 250 units made, this limited edition, highly collectible “Izabella” Stratocaster replica from the Fender Custom Shop celebrates this milestone in music history.
Jimi Hendrix wholly embraced the Fender Stratocaster as his preferred instrument. Of the many Stratocaster guitars that Jimi played, “Izabella” is the one with which he’s most closely associated, thanks to his searing performance of “Star Spangled Banner” at the Woodstock festival on August 18, 1969. The Woodstock festival stands as a pivotal moment in the history of American culture, and remembering the event on its 50 th anniversary, the voice that rose highest, and spoke the loudest, belonged to Jimi Hendrix and Izabella. The climax of Jimi’s set was his interpretation of “Star Spangled Banner.” Never before had the national anthem been performed with such expressive ferocity. The sound of Jimi Hendrix and his Stratocaster loudly illustrated the anthem in a blazing new light. “Jimi Hendrix playing ‘Star Spangled Banner’ at Woodstock was a cultural moment heard around the world,” said Mike Lewis, VP Product Development, Fender Custom Shop. “We’re especially excited about this release because not only is the Izabella one of the most iconic instruments of our time, it represents a moment in history that will forever be woven in our cultural make-up. The Fender Custom Shop has done tributes to many extremely meaningful artist guitars through the years, but there was an extra sense of awe and privilege in the air in recreating the Izabella.”

The Izabella Stratocaster was originally purchased at Manny’s Music on West 48th Street in New York City. It was a 1968 Olympic White Strat with an alder body and two-piece maple neck, with no “skunk stripe” and truss rod adjustment at the heel. The “F style” neck plate had the serial number 240981, which, along with the pickups and hardware, were standard 1968 issue. Significantly, the guitar featured the “big” Strat headstock with the Bob Perine-designed Fender logo and bold arced “Stratocaster” type. The headstock, when turned upside down in his hands, became an iconic emblem. Izabella was the last guitar Hendrix played with his original Jimi Hendrix Experience group, and the final guitar he ever played in concert. Izabella is displayed at MoPOP (formerly EMP Experience Music Project) in Seattle, Wash. “This Stratocaster timestamps an amazing era and shines a spotlight on one of the most epic moments of our time,” said Janie Hendrix, CEO/President, Experience Hendrix L.L.C. and Authentic Hendrix LLC. “The unforgettable image of Jimi with his Strat on that Woodstock stage is embodied in this guitar. He
changed music history with every earth-shaking note he played that day. What a way to celebrate the 50th anniversary of Woodstock. And we’re overwhelmed by the opportunity to join Fender in regifting the world with this beautiful recreation.”

Hundreds of hand-crafted steps went into making the Fender Custom Shop Limited Edition Jimi Hendrix™ Stratocaster authentic to the original. Priced at €7,549.00 and fully authorized by Authentic Hendrix, it captures all of the details and features of the original to allow players to harness the power of his iconic set at Woodstock 1969. This model features an Olympic White alder body with a 3-ply Parchment pickguard, as well as a flatsawn maple “`60s C”-shaped neck with a maple fingerboard, 21 vintage-style frets and nickel-plated steel .010-.046 gauge strings. To harness that epic Woodstock tone, the guitar has a 6-saddle American Vintage synchronized tremolo; three custom hand-wound ’69 single coil Strat® pickups in the bridge, middle and neck positions and a three-position blade switch with controls for Master Volume, Tone 1 (neck pickup) and Tone 2 (middle pickup). Vintage-style nickel/chrome Closet Classic hardware is featured throughout, in addition to Vintage White control knobs. Each Fender Custom Shop Limited Edition Jimi Hendrix Stratocaster will come with a deluxe hardshell case, custom strap, custom headband, coiled cable, commemorative booklet and a Certificate of Authenticity.

The Fender Custom Shop Limited Artist Signature series celebrates the storied guitars of legendary musicians by building recreations of their instruments in exacting detail. Based on close examination of the original guitars, every nuance is noted and incorporated into the build. Reverse-engineering the model, vintage, wood, hardware, electronics, finish and player customizations are all vital to the process. Most importantly, the player’s wear patterns are recorded: every nick, scratch, gouge and bump are vital to the authenticity of the recreation–they are mapped and documented with precision.

A showpiece for any music-lover’s collection, the Limited-Edition Jimi Hendrix™ Stratocaster not only preserves the memory of one of the most iconic performances in all of rock history, but it also allows fans worldwide to have a true Jimi Hendrix experience with detailed artistry and craftsmanship.