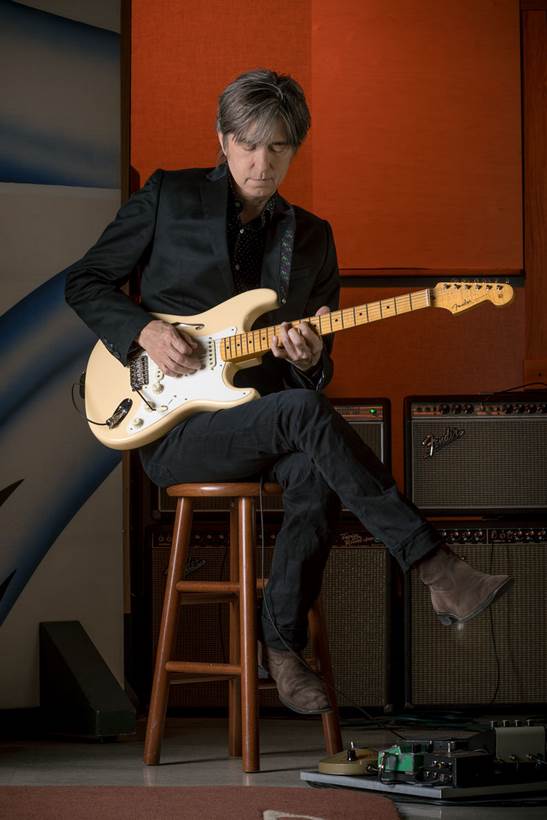 Fender Musical Instruments Corporation (FMIC) today released the Eric Johnson Signature Stratocaster Thinline – Fender’s first custom-chambered semi- hollow Stratocaster guitar to include a traditional Stratocaster arm and body contours. Grammy-winning, multifaceted guitarist Eric Johnson is known for his Ah Via Musicom album and hit song “Cliffs of Dover,” as well as his perpetual search for ideal tone and new sounds. After nearly two years of refinement, Fender and Eric Johnson have co-designed his third Artist Signature Series model.
Lightweight and resonant, it combines tones from his favorite semi-hollow body guitars and signature Stratocaster, pushing the boundaries of innovation at Fender and beyond. “With this third signature model it was important to me that we create something new that could widen horizons and pull in different styles of music,” Johnson said. “When I’m writing, my go-to instrument is a
Strat, because it’s so universal and versatile – but I’ve always loved semi-hollow body guitars. There’s a certain resonance you get out of an acoustic guitar, and I was curious if combining that with a Strat would add another dimension. I knew Fender was the perfect partner to work with on this, and the
process of bringing new innovations to players is always exciting.”Johnson is currently playing the Eric Johnson Signature Stratocaster Thinline on the road during his North-American tour, performing selections from his recent release, Collage, and his celebrated album
Ah Via Musicom in its entirety. Scheduled appearances are here. This same model was also used to record guitar parts on Collage.
“Fender has been making guitars for well over 70 years, but we always learn something new about guitar making and tone every time we work with Eric,” said Justin Norvell, SVP Fender Products. “It rejuvenates our curiosity and thirst for innovation. We worked very closely with Eric to retain everything that everyone loves about a Stratocaster, while still conveying that unique tone he was searching for. Knowing this guitar passes Eric Johnson’s sonic test is an honour for us.”

Bringing to life the vision of one of the most respected guitarists in the world, the Eric Johnson Signature Stratocaster Thinline is an R&D tour-de-force. Throughout the process, Johnson worked very closely with Fender as a co-designer to shape the model to his unique specifications. After testing several configurations, Johnson settled on the lightweight capped alder semi-hollow body with an F-hole, which resonates with pure Fender tone. He and Fender’s R&D engineers together developed a custom Eric Johnson neck. What resulted was a custom quartersawn “’57 Soft V”-shaped one-piece maple neck that slightly smooths the sharpness of a “V” profile, rounding it out so it’s more comfortable for rhythm and lead playing. Strong and stable, this neck is comfortable for any playing style. The guitar also features single coil pickups to capture Johnson’s uniquely articulate sound.
Custom chambers and traditional Strat contours make this guitar sound as good as it looks, and the nitrocellulose lacquer finish not only lets the body breathe with its true tonal character, it also ages and wears in a distinctively personal way. Johnson’s signature Stratocaster also has no tremolo cavity cover on the back and no screw holes for one. Other features include a vintage-style synchronised tremolo bridge and staggered tuning machines that provide the proper break angle at the nut for improved tuning stability. According to Johnson, the final product still sounds like a Fender, but with a thick, woody tone for lead guitar from the bridge pickup and a chimey tone for rhythm parts.
In true tradition, Fender’s Artist Signature Series models honour popular and iconic musicians through product progression and storytelling, creating instruments inspired by the unique specifications of the world’s greatest guitarists and bassists. Fender’s new Eric Johnson Signature Stratocaster Thinline is available now at local dealers and on www.Fender.com.

For technical specs, additional information on new Fender products and to find a retail partner near you,
visit www.fender.com. Join the conversation on social media by following @Fender.